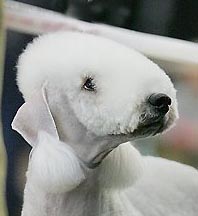 Now this is ten days after they have
been released from quarateen
and first show for Musse and Tjejen.
The show is in Birgmingham and it´s about 55 bedlingtons.

The show is over!
We won Best Bitch and Best Male!
Best of Breed was Musse - Bla Skuggans Mowie Star.
The judge was Mr Joe Braddon from England

Tootsie and Bill with the Borderterrierfriends
Lina and Douglas in Bryssel.
Lot of traffic today!

Where is the party ?

Can I come too?

Winning Best In Show breedinggroup in San Remo 1999 under Mr Filippini. The Mare is giving out the price.

Winning Best in Show breedinggroup in Monaco 1999. It was a 3 judge system.

Mammie - Daddie - and daughter!
The puppy is Bla Skuggans Midnight Sun who was exported to Japan.

I was also exported to Japan.
My name is Bla Skuggans Silver Cloud "Piccolo".

My name is Bla Skuggans One Moment Later,
but they call me Alex. I also live in Japan.

My owner in Japan call me David
but my real name is Bla Skuggans Night´n´Day.

They call me Popi but my real
name is Bla Skuggans Love At First Sight.
I was the first bedlington from this
kennel who was exported to Japan.